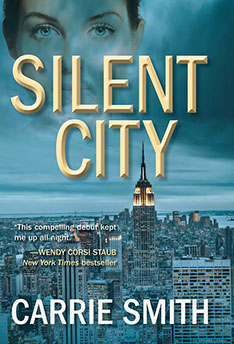 “Fans of procedurals should add Smith to their must-read lists."

"This compelling debut kept me up all night. Crime fiction fans, take note: newcomer Carrie Smith belongs at the top of your
to-be-read pile!"

NYPD Detective Claire Codella has just won a tough battle with cancer. Now she must regain her rightful place on the force…

Homicide Detective Claire Codella hasn't even been back a day when Hector Sanchez, a maverick public school principal on Manhattan’s Upper West Side, is found murdered. The school is on high alert. The media is howling for answers. And Codella catches the high-profile case at the worst possible time.

As she and rookie precinct Detective Eduardo Muñoz race to track down the killer, Codella uncovers dirty politics, questionable contracts, and dark secrets. Each discovery she makes brings her closer to the truth, but the truth may cost Codella her life.

plot, and a nicely detailed rendering of police work...Fans of procedurals should add Smith to their must-read lists.”

“Well-crafted...an insightful glimpse into the emotions and consequences of being a cancer survivor.”

“Smith’s debut grabs you on the first page and makes you feel like you are right there in the middle of the action. The tension increases as the drama unfolds. It is well paced and will leave you anticipating her next book.”

“A page-turner…Bravo to this fresh new voice!”

“Smith's New York is a real place and her story's a good one, but her true superpower is her ability to unravel the messy intricacies of peoples' interior lives. In Smith's work—as in life—there are no minor characters.”

“While this is a hard to put down and suspenseful read, it’s also an excellent look at human relationships and behavior. Claire Codella is one of those characters that stick with you, one of those you want to get to know better. Thank heavens for series mysteries: as readers, we’ll get that opportunity. This is a bravura first book.”

"Silent City grabs you from page one and doesn't let go. With a cast of characters whose conflicting interests come together in a seamless tapestry of dishonesty and deception, you'll be guessing until the tense conclusion of this incredibly taut tale. I can't wait to see what author Carrie Smith does next. She's got a new fan.”

–Maggie Barbieri, author of the
Murder 101 Mysteries and the Maeve Conlon Novels